92 replies to this topic

im not usually into acoustic singer songwriter types. but this rules.


I'm interested to see if i'll get into the new stuff as much/as quickly
without the good winter cooped-up-in-a-cabin magic.

oh and, using RE stacks for the end of season four house was the greatest thing the show couldve done

oh yeah for sure.

but i was talking about the backstory involved with the first album, and i just worded it strangely.

BREATHE IN! BREATHE OUT!!!

Always is valueless. I wish I'd never heard her speak a word.

maybe because it's named and pronounced like "bon hiver" which in French I believe means "good winter." I'm trying to remember back to taking French in school, so I may be wrong.

every day above ground is a good day

So who is excited? I am particularly excited about the bold text! 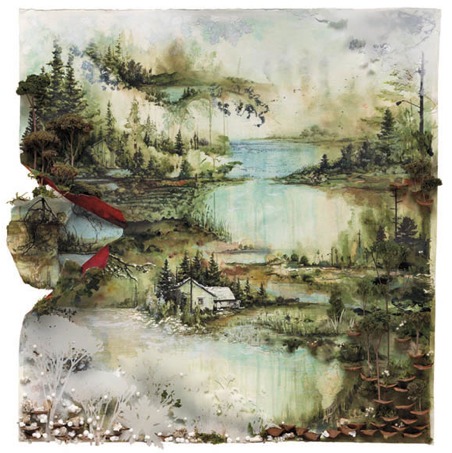 Way back in 2007, Justin Vernon self-released For Emma, Forever Ago, his first album under the name Bon Iver. Jagjaguwar picked up the release the next year, and it slowly became a massive word-of-mouth indie hit. In the years since, Vernon has launched his Volcano Choir side project, worked with Kanye West and Gayngs, and done all sorts of one-off gigs and guest appearances. But though he's done a ton of touring with Bon Iver, that main project has been largely silent ever since he released the Blood Bank EP early in 2009. And on June 21, Bon Iver will finally return when Jagjaguwar releases their self-titled sophomore album.

Vernon and brother Nate recorded and mixed the album over a three-year period at a former veterinarian's clinic in Wisconsin. Regular Vernon collaborators Sean Carey, Mike Noyce, and Matt McCaughan play, sing, and contributed production to the album. Volcano Choir members Jim Schoenecker and Tom Wincek helped out with processing, and Rob Moose, who has worked with the National and Antony and the Johnsons, helped arrange strings. The LP also features pedal steel player Greg Leisz and a horn section that includes Mike Lewis, C.J. Camerieri, and free-jazz monster Colin Stetson. The lush cover art, from Minnesota artist Gregory Euclide, is above.

We've got the tracklist below, as well as a brief preview video for the album.

i enjoy the music scene in minnesota.

I didnt realized this was happening!!
Thank you alex!

soo excite! nice shout-out to ohio. legit. his voice is soo haunting. his voice alone reminds me of the hauntiness of grizzly bear.

new album is so good.

this is beauty.
the strings.
pure beauty.

that last song is pretty shocking.

but seriously, amazing album. Perth is quite a way to start an album.

so i'm only in the middle of track 3 and this is blowing my mind
i don't know why i didn't expect this record to be this good. dang

my band . my self-indulgent electronic nonsense

i don't know if these songs will have the same staying power with me as For Emma... but the thing is just pure, sweet ear candy. excited to put this on while chilling on the porch on summer nights. tumblr | last.fm
Back to Music